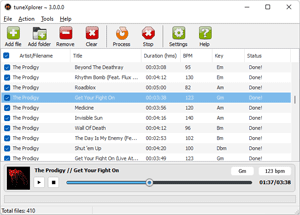 What do you need to create perfect mix? No matter what method you use - harmonic mixing or beatmatching, you will need to know the basic characteristics of the audio track, such as the key and tempo. tuneXplorer will help you find the key of song and BPM value with high accuracy. After analyzing the audio, you can save KEY and BPM in the audio tags for later use in a popular DJ software. Optimization for the latest multi-core CPU ensures significant performance gain, your entire music library can be processed in minutes.

Harmonic mixing is mixing tracks that are not only in the same key, but also with keys that work with one another. The first thing you have to do before that can happen though is to key out your tracks. Keying tracks with tuneXplorer is very easy. First, you need to add single track or entire folder of audio files to the program. Next, click the "Processing" button and mark the "Calculate Key of track" checkbox. Are you ready to create fluid mashup? AudioRetoucher can help you change the pitch of audio track.

Beatmatching is another popular mixing technique. It entails seamlessly matching the tempo of two songs so that the beats of the two songs hit at the same time when both are played simultaneously. We spent a lot of time to improve our BPM detection algorithm and now it works with very high accuracy.

tuneXplorer support the latest ID3v2.4 and ID3v2.3 standards to save BPM and Key values inside MP3, WAV and AIFF audio files. Since we are using the standard fields, such as TKEY, TBPM and Comments, they are compatible with other popular software - iTunes, Serato, Traktor.

You can export calculations result to the Comma Separated Values file (.CSV) and import this file to any spreadsheet or database.

You have a modern computer with a multi-core processor, but most programs use only one core? tuneXplorer can use all cores of your CPU, more cores - more speed! The number of used cores can be changed in the program settings to select the optimal balance between performance and system load.

Abyssmedia regularly upgrades its products to ensure compatibility with the latest operating systems.