What is the difference between .BAT and .EXE files?

Batch files are simply text files or small scripts that can be executed by the command line processor - "command.com", they were widely used in the DOS environment to automate common tasks. With the release of Windows, "cmd.exe" is responsible for executing batch files. The command syntax has been greatly expanded. With this in mind, batch files can be classified as interpreted programming languages.


EXE files are different from BAT files since they contain executable binary data rather than plain text commands. They are stored in the Portable Executable (PE) format. The EXE file format includes various headers and sections that tell Windows how to run a program. Some portions of an EXE file may contain program code while others may contain resource data.

What are the disadvantages of converting bat to exe?

What are the advantages of converting bat to exe?

What tool is used to compile batch scripts?

One of the first compilers for batch files was the Quick Batch File Compiler. We spent a long time collecting user feedback and incorporating new features into the compiler. Many of these features have been copied by our competitors, but we are still one step ahead. 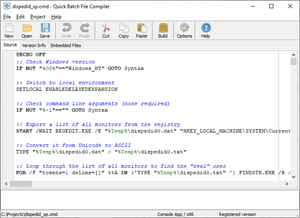