With the proliferation of 4K and 8K ultra-high-definition content, a new generation of video compression algorithms is needed to deliver better video quality and lower bandwidth costs. The most commonly used video codes in this scenario are AVC(h.264), VP9 and HEVC(h.265). With the standardization of AV1, another modern video coding standard is joining in. While AVC and HEVC offers the best compatibility across devices and platforms, the newer standards such as VP9 and AV1 offer a much higher compression efficiency and thereby also a better user experience. Perhaps AV1's most important feature is not a technological one: It was designed from the very start to be completely royalty-free, in an effort to provide a truly open video codec capable of providing high quality video streaming at lower bitrates.

What are the differences between AV1 and HEVC? As end users, we are primarily interested in compression efficiency. But don't forget about compatibility - without hardware support for decoding, modern codecs can drain your battery power way before you finish watching a movie. Well, let's get started. 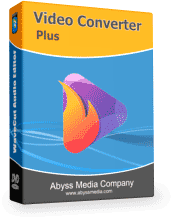 Key features of Video Converter Plus

AOMedia Video 1 (AV1) is the successor to VP9, developed by the Alliance for Open Media, a consortium of the largest tech companies including Intel, Amazon, Apple, Facebook, Google, Microsoft, Mozilla, and Netflix (see all the members below). Due to the vague and expensive HEVC licensing structure, AOMedia decided to create a royalty-free standard that is able to provide better performance than HEVC.

HEVC codec is the successor to AVC, developed by Moving Picture Experts Group (MPEG) and the Video Coding Experts Group (VCEG) for encoding and decoding video streams more efficiently and economically. HEVC has a very complicated and expensive royalty structure. Therefore, the joint shareholders from MPEG LA, HEVC Advance, and Velos Media - which including Ericsson, Panasonic, Qualcomm, Sharp, and Sony, all have different license fees on HEVC.

AV1 is 30% more efficient than HEVC and VP9. Tests performed on a wide range of bitrates and resolutions show AV1's average bitrate is 17% lower than HEVC/H.265. When it comes to 4K Ultra HD 2160p video, AV1 outperforms HEVC by 43.90%, compared to 720p by 37.81%. Other results are shown in the following images of the HEVC and AV1 datasets from Bitmovin. Facebook shows that the AV1 codec reduces bitrate by about 40% compared to VP9 and up to 50% compared to H.264 (x264). This also means that the AV1 codec reduces bandwidth requirements and compresses 8K/4K file sizes by 30%. 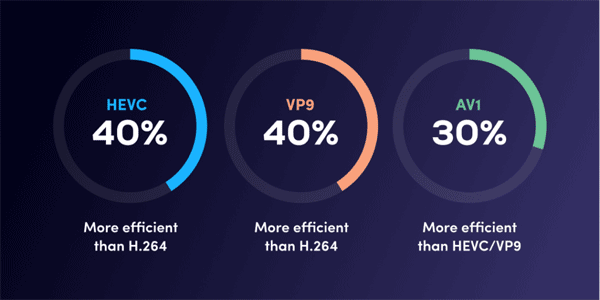 AV1 had a reputation for being slow because of a reference coder that was not intended for production use. New implementations of the algorithm have made notable advances in this regard. The high degree of parallelism and code optimization makes it possible to encode even faster than HEVC, while producing smaller files with similar visual quality. At the fastest settings, you can encode 1080p video about 5 times faster, even on previous generation processors, and the result is insanely small and looks great. Things are even better with the latest generation processors, but more about that below.

Support for the new AV1 video codec has expanded rapidly over the last several months. Decoding AV1 requires relatively recent hardware like Nvidia's RTX 30 series graphics cards, AMD's Radeon 6000 GPUs, or 11th generation or later Intel CPUs. Apple devices don't support it yet, but a Qualcomm Snapdragon chip will next year. By far the most efficient hardware implementation have graphics cards of the Intel Arc Alchemist family. The situation with HEVC support is much better, almost all hardware released in the last three years has full support for this format. 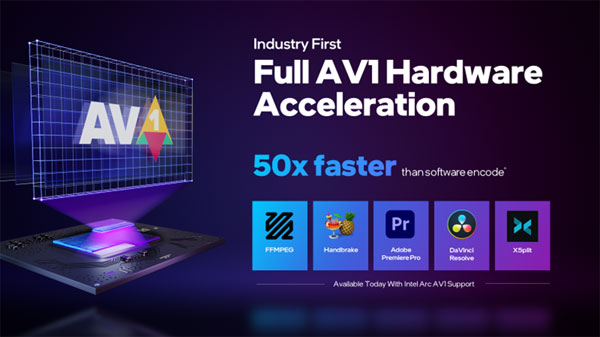 Chrome, Firefox, and Edge, at least, cannot play HEVC. It's covered by a gaggle of patents from many companies and patent trolls, which belong to several patent pools and some don't belong to any pools at all. In general, HEVC is a good technology but its legal situation is all but unworkable. AV1 was created to solve that problem.

According to a recent MSU codec comparison report, AV1 is currently the highest quality video coding format. Based on the YUV-SSIM quality metrics, AV1 offers the same quality at more than 12% less data rate than x265 does running in three-pass Placebo mode. Bitmovin's research also shows that AV1 video quality is superior to HEVC and VP9 at the same bitrate settings. The test used 1080p videos at 500kbps and 24fps on the PSNR and VMAF metrics.

Considering the above, AV1 is 30-50% more efficient, with better performance and superior image quality. Moreover, unlike HEVC, which requires equipment manufacturers to pay licensing fees, AV1 is open and royalty-free. With Apple, YouTube, Netflix, Google, Adobe, AMD, Intel, Nivida and other giants joining AOMedia, creator of the AV1 encoding format, AV1 will witness rapid adoption and hardware support. AV1 could replace HEVC/H.265 and VP9 as early as next year and dominate the processing of 4K UHD content.